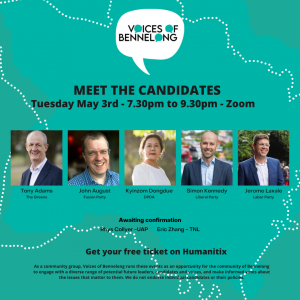 Billed as one of the most important elections of our lifetime – Voices of Bennelong’s interactive panel event is your chance to ask questions of the candidates and be heard on the issues that matter to you.

This event will be divided into two parts:

➡ Questions for candidates can be submitted through the chat on the night, or emailed to  prior to the event.

➡ In order to fit in as many questions as possible, candidate answers will be limited to a maximum of three minutes each, with fact checkers monitoring the responses on the night.

How Bennelong votes in this election will have real consequences for generations to come.

A healthy democracy requires people to not only vote for who they want – but to know who and what they are voting for.

We encourage everyone to join the conversation and get involved. After all, democracy works best when people are engaged!

Come and join us for an online Kitchen Table Conversation.  We want to hear about what concerns you.

Kitchen Table Conversations is a great way for Voices of Bennelong to listen to, understand and represent the key concerns and broader issues that Bennelong residents deem most important.

Each conversation is with group of 10 participants discussing their opinions on key topics.

It is important to understand that a KTC is not a forum for debate but is a process for listening to what the community values, their issues and concerns.  The topics discussed reach across all levels of government. The KTCs are all about listening, so our facilitators are not in a position to question or debate the issues raised by participants.

The intention is to capture the concerns of a representative cross section of the population with all opinions expressed being recorded in complete anonymity and channeled into advocacy with our government representatives.

Real Climate Action – Why it’s needed, what it looks like and how it can be done.

Climate Change presents the biggest challenge of our times, yet Australia lags behind the rest of the world in taking meaningful action.

We had a great chat with Professor Lesley Hughes, Nicolette Boele, and Zali Steggall MP about climate science, clean energy economics, and the leadership role politics can play in determining a way forward.

Nicolette Boele has a background in capital markets, is a clean energy finance specialist, and is the current community backed Independent candidate for Bradfield. 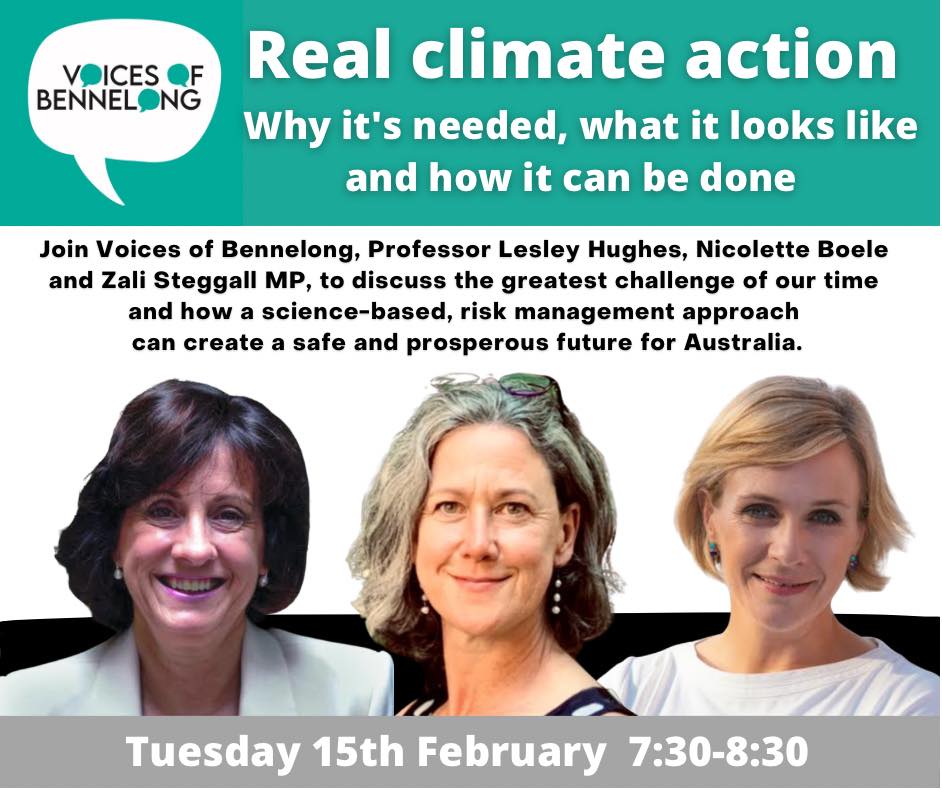 We were lucky to have a discussion with Anthony Whealy QC and Craig Reucassel on integrity and corruption and all the grey areas in between.

Anthony Whealy QC is a highly esteemed former Justice of the Supreme Court of the NSW Court of Appeal, and is the Chairman of the Centre of Public Integrity. The Centre of Public Integrity is an independent think tank dedicated to preventing corruption, protecting the integrity of our accountability institutions, and eliminating the undue influence of money in Australian politics.

Craig Reucassel is an Australian television and radio comedian, who is best known for the documentary series, Big Weather, The Fight For Planet A, War on Waste, and for his work with the satirical comedy, The Chaser. Craig brings a wealth of experience and an impressive track record in delivering engaging content and impact campaigns that raise awareness, change behaviour and influence the policy arena. Check out Craig’s recently released Big Deal documentary on ABC iview.

Watch the recording to hear our discussion. 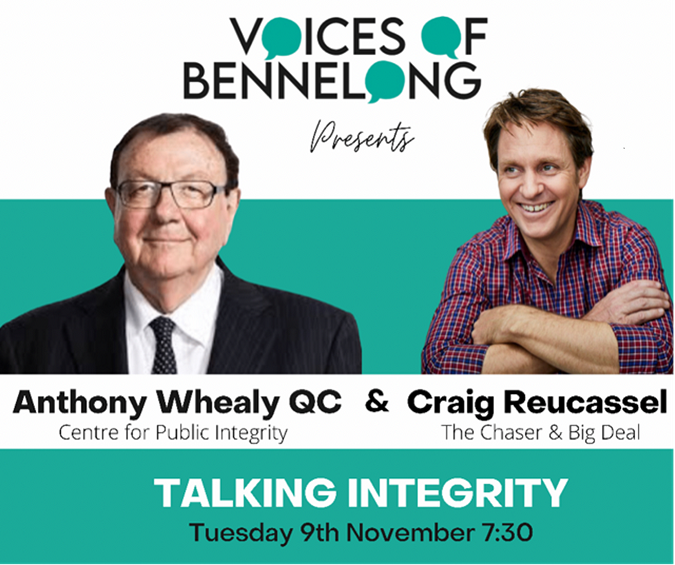 We would love to hear from you. Just email them to or drop them into the chat on the night. Participatory democracy is what this movement is all about!